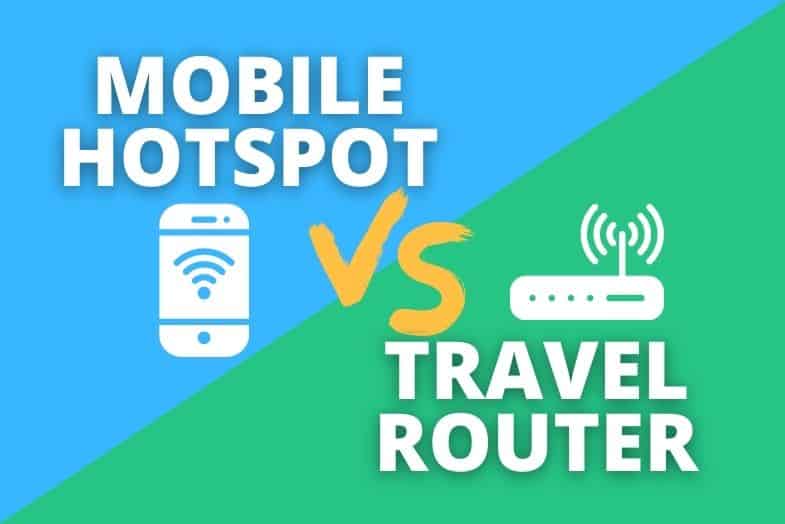 Not all Wi-Fi-enabled devices are the same or function in the same way. Several key differences exist between a high-quality mobile router and a mobile hotspot.

Travel WiFi terminology can be complicated, whether you’re shopping for your first device, upgrading, or finding the best option for your particular needs. Understanding the differences can substantially impact your data speeds, mainly if you are a regular traveller.

Is a Mobile Hotspot a Router?

Both create a mobile hotspot, so in that sense, they are similar; however, there are key differences that we’ll get into the next section.

What’s the Difference Between a Mobile Hotspot and a Mobile Router?

A travel router converts cellular (3G, 4G, and LTE) signals into Wi-Fi for use at a fixed location; the mobile broadband router provides a local Wi-Fi hotspot.

Basically, it’s a WiFi router that you take with you on your travels. The router uses a SIM card instead of a wired connection to the internet; you will have a private internet connection wherever you travel. In addition, most mobile routers can connect up to ten devices to the internet simultaneously.

When you wish to share internet access with several devices at once, this is the ideal solution, so multiple family members who want to use their devices simultaneously will also benefit from this solution.

If your travel router is unlocked, you have the freedom to use it with whichever network provider you wish. You can then shop around for the best deal or the ideal amount of data to meet your requirements. A locked ( specific to one network provider) SIM might be the better option for static use, enabling you to choose the best network for your particular area of the country. You might be able to get a better deal on the data package.

As the name suggests, a mobile hotspot, or personal hotspot, is a device that acts as a portable Wi-Fi hotspot, allowing users to access the internet on the go. You can purchase mobile hotspots as a separate item; however, they are now available on most smartphones.

Devices capable of broadcasting wireless signals to other devices while on the move are mobile hotspots. To avoid confusion, this is not the same as a hotspot, which you can find in public areas within airports, shopping malls, and coffee shops.

As a general rule, a mobile hotspot works by converting an LTE connection from your phone into a Wi-Fi signal. After that, you can “connect” your computer or another device to it as you would to a Wi-Fi network at home or in public.

Another way to create a mobile hotspot is with a MiFi device. Suppose you are frequently in areas without a WiFi connection? If you wish to connect several devices at once or use a lot of data when not at home, a MiFi device will benefit you rather than setting up mobile hotspots with your smartphone.

You will still require a SIM card for data, but the advantages are that you won’t drain your smartphone’s battery; you can connect several devices at once and preserve the data on your phone’s SIM.

Is a Mobile Router Better Than a Hotspot?

In most cases, the mobile router is a better option than a mobile hotspot; here are the key differences between the two.

Do you do a lot of travelling? Do you travel to more remote locations in your campervan, caravan or motorhome where internet access is spotty, to say the least? Or perhaps you want the added security...

Continue Reading
link to How Can I Boost My Wi-Fi Signal When Travelling?

Having a high-speed internet connection while travelling is crucial. It doesn't matter if you're a digital nomad who needs to check emails to stay in touch with clients or if you're on a trip to an...