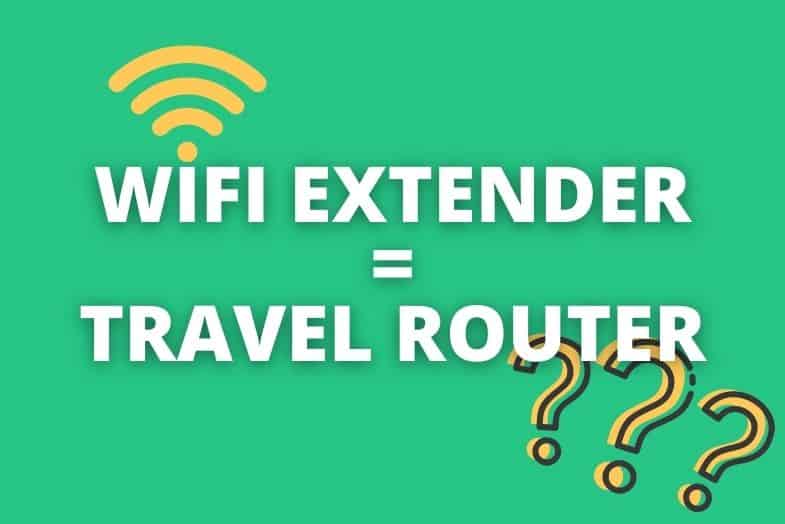 WiFi extenders and travel routers look similar; however, there are significant differences in how they work and their primary purpose. Many people want an answer to the question: can you use a WiFi extender as a travel router? Continue reading this article, and we’ll be answering that exact question.

What’s the Difference Between a Wifi Extender and a Mobile Router?

You cannot use wireless WiFi extenders in place of a mobile router. They are solely helpful for extending the range of your wireless network. WiFi extenders are not routers; they receive and rebroadcast the WiFi signal.

The design of a WiFi extender is to wirelessly connect to an existing router to extend the range of your current wireless internet in your home.  Often, even though you have superfast broadband, some home areas can be dead spots where the internet can’t reach. Another use is to extend the WiFi out into the garden or backyard.

A WiFi extender is essentially a tiny hub you position between your router and the device you’re using to connect to the internet, thereby extending your WiFi range.

In addition, you can use an extender in your campervan, caravan, when camping etc., to boost the WiFi signal from a mobile router if the signal is weak and you’re having connection issues.

A mobile router is a WiFi router that works similarly to the one you have at home, except it is smaller and more portable, making it better suited to travel. You take a travel router on trips to make connecting and managing devices on public WiFi networks easier, whether in a hotel, airport or anywhere; there are even mobile routers made explicitly for the car. The majority of router manufacturers offer travel versions of their products.

There are two types of WiFi extenders in use; one type is the powerline adapter that connects wirelessly to your router and plugs into a mains socket. The extender sends the data via the electrical wiring in your home. The second extender type works by rebroadcasting your existing WiFi signal from the router.

Travel routers are compact and lightweight wireless routers, perfect for holidays, campervans, etc., or when you’re not at home.

A portable router is full-featured, allowing Internet access via a wireless connection to any network.

Because of its design, a travel router also keeps your web surfing private.

Can You Use a Wifi Extender as a Travel Router

The extender picks up the wireless signal sent by your router and generates its own signal, which it then broadcasts to locations where your network connection is failing.

As you can tell from that brief explanation, you cannot use your WiFi extender as a travel router because it picks up the signal from a router and not directly from the network.

However, you can reconfigure an old router to act as an extender. You will need to ensure you can convert your router into an extender by checking the router’s manual. If you’ve lost it, search on Google; you can usually find manuals there.

link to How Do Mobile Routers Work? [In Layman's Terms]

We have grown accustomed to having internet on tap 24 hours a day, anytime we need it, so we quickly get frustrated and annoyed when we travel and face expensive data roaming. A mobile router is an...

If you're about to go on holiday and the whole family will be on the trip, then how to get internet access might be top of your list of things to arrange.  In today's world, we all have...