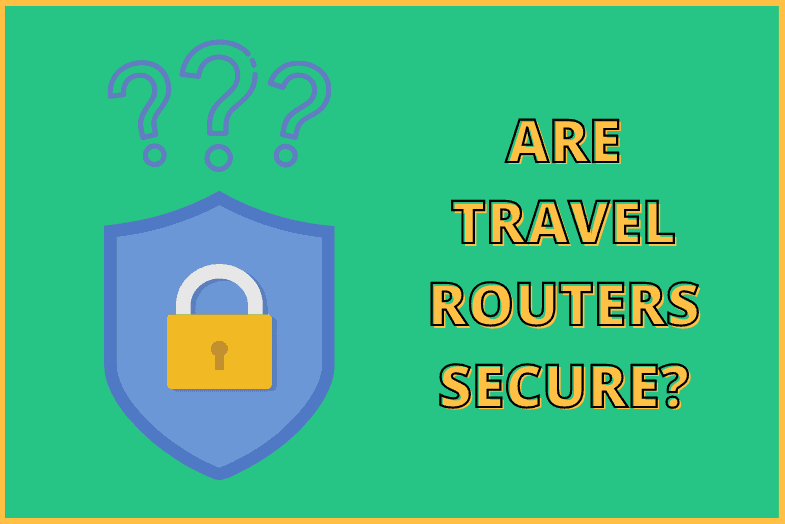 Using a public WiFi network can be a security risk, as is well known. It’s a good idea to avoid using public WiFi in airports, coffee shops, and other public places, especially if you need to transfer sensitive data. However, these high-risk regions aren’t the only places where travellers face WiFi security difficulties.

You’ll unlikely encounter any issues connecting to Netflix or other streaming services with the default router settings. Still, we strongly suggest using a Virtual Private Network (VPN) for added security and privacy.

Using a travel router with VPN (Virtual Private Network) support is probably the simplest way to secure your data. So just how does a travel router help you stay secure while using WiFi on the go? We’ll cover that and more in this blog post.

A hacker can take control of your router without your permission. Cybercriminals crack your router’s password or utilise a vulnerability to get around your security measures. Hackers have numerous strategies at their disposal to successfully break into a router.

A hacker can break into your network in minutes if you haven’t set a secure password. Once in control, hackers can modify network settings, access internet data, and install malware.

Hackers might think otherwise even if you don’t believe there’s anything of value on your computer. Data and identity theft are two of the most common reasons hackers want access to your WiFi devices.

How Secure Are Travel Routers?

How to Protect Your Travel Router from Hackers

The best travel routers safeguard Public WiFi by isolating devices and utilising a VPN to encrypt the internet.

Device Isolation is a massive plus with travel routers in terms of security. This system is known as device isolation when your devices are physically isolated from the WiFi network and other connected devices.

A travel router creates its private WiFi network and ensures it has the highest level of WiFi security. You also include your passwords which only you can see. You create your network via the travel router, which will be accessible to all your devices.

The advantage is if public WiFi is compromised, other devices won’t have direct access to yours. In addition to phishing attempts, where someone sends a false email to acquire your passwords, the most common virus attack is when an infected device attempts to infect other devices.

Secure Your Travel Router Via A VPN

Travel routers provide some security, but they aren’t foolproof. VPNs add an extra layer of protection. They protect your communications, but not necessarily all your devices.

The ideal solution is a travel router with an always-on VPN. Some routers can do this, but most require a separate VPN setup. However, you can set your VPN to connect when you start up your device automatically.

Do you do a lot of travelling? Do you travel to more remote locations in your campervan, caravan or motorhome where internet access is spotty, to say the least? Or perhaps you want the added security...

Continue Reading
link to How Can I Boost My Wi-Fi Signal When Travelling?

Having a high-speed internet connection while travelling is crucial. It doesn't matter if you're a digital nomad who needs to check emails to stay in touch with clients or if you're on a trip to an...